The Royal Family and The Crown

At the end of 2017, The Crown produced by Netflix has once again pushed the British royal family to the public. 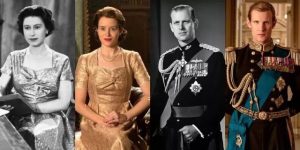 Although Netflix’s work has always been known for its unexpected, dramatic plots, The Crown has been adhering to its refined style since Season 1. The perfect portrayal of the Queen’s “ordinary”, contradictory, yet tender character, accurately captured the British introverted self-restraint and exquisite life style.

When Elizabeth was a still a princess, she dreamt of living an ordinary, simple life. At the beginning of The Crown, she was enjoying her role as the wife of a military officer very much and their small family was spending their life near the shore away from Buckingham Palace.

Nonetheless, her fantasy of being someone ordinary was immediately crushed by reality. George VI died of lung cancer in 1952 and the 26year old Elizabeth had to rush back to London to inherit the throne. The burden of stabilising the people and re-establishing a post-war England all fell on her young shoulders. In the show, Elizabeth did not even have time to pay tribute to her father. She received a letter from her Queen Grandmother, telling her that: “I have seen three generations of great monarchs defeated because they cannot draw the line between private life and royal responsibilities …The fact is, The Crown must win. Must always win.”

Thus from that day, Elizabeth’s words and actions became labelled as sacred, this left her with no room for mistake. Her new role as “The Queen” has also brought many changes and challenges to her personal life: the young Prince Philip was extremely dissatisfied with his new role as “the man behind the Queen” and began to engage in drinking parties and returning to the palace very late at night.

The burden of running the country and the troubles caused by her marriage made Queen Elizabeth annoyed and frustrated, but she still meticulously completed her daily work. She was hard-working and self-restraining: ashamed of not having fundamental education, she hired a tutor to teach her basic science. Though annoyed by her husband’s accusation of infidelity, she firmly claimed that “I did not hide from you. Nothing at all … What disappoints everyone is that I’ve always loved you. Only you. Do you dare to look into my eyes and say the same thing?”

Such a sincere and strong Elizabeth not only stabilised her country and her family, but also prompted the audience to truly see her as an ordinary person with emotions no different than ours. This pushes the audience to link the role on the screen to the real queen. What is Elizabeth II like? In this era of rapid change, why did the British people stick to their love for the Queen for decades?

Historically speaking, England has been run by a monarch since the seventh century. This continued into the 21st century. Although the Royal Family has no real political power now, they are still the eternal symbol of English aristocracy and royal power.

Headed by Queen Elizabeth, the humble and steadfast attitude of the Royal Family has also won the public’s favour. Even before Elizabeth’s reign, during her father’s reign in World War II, the King and Queen chose to stay in London instead of fleeing to a safer place. At that time Elizabeth was only a princess. Nonetheless, after receiving her father’s consent, Elizabeth joined the Women’s Auxiliary Territorial Service during World War II and became known as the Second SubalternElizabeth Windsor. Among all the current leaders of the world, Queen Elizabeth is the only head of a country that has participated in World War II.

The Queen’s long reign and the stability that she brings to the country have encouraged the public to appreciate her and what she represents. There’s a saying (in China) “Prime Ministers come and go, but The Queen stays there forever”. Elizabeth has been in the office for over 65 years, which makes her the longest serving monarch in British history.

Not only is the Queen in great health, Prince Philip, who is five years older than the Queen, is also fit himself. Nowadays when love and marriage have become more and more fragile, accompanying each other side by side for more than sixty years is probably the best that one can ask for. Although the Queen and Prince Philip have experienced many ups and downs unimaginable to the general public, this steadfast marriage that has lasted for decades has helped fulfill the ultimate fantasy of “being with one from beginning till end”.

Having such a steadfast, elegant queen, it is not surprising that 80% of the British citizens are willing to support the continuing existence of the Royal Family.